PROFIBUS is installed in every crane on the site and PROFIBUS is also used as a connection to exchange information between the various stand-alone installations and the higher-level control system. In the bio-energy plant, the entire distributed control system is built with PROFINET and PROFIBUS.

A crane suddenly and spontaneously came to a standstill for no apparent reason. When a crane breaks down, no more waste is lifted out of the bunkers. But the residual waste just keeps arriving, which means that trucks can no longer unload if the bunker is almost full. So they have to wait and this longer waiting time costs money. If a crane can’t run automatically, it has to be controlled manually by a crane operator. That takes more time and naturally, man-hours. Eventually the process did continue, but it cost a considerable amount of time and money. It became clear that the failures were phantom malfunctions, because the fault messages resolved themselves. The control system indicated that a number of PROFIBUS components were no longer usable and nodes stopped working. The initial check was to see if the supply voltage had fallen away, but when that turned out not to be the case, ProfiTrace from PROCENTEC was used to investigate the network in more depth. The built-in scope allowed this to take place very quickly. The tool reported immediately that there was a fault in the network.

The problem proved to be mainly in the cabling, the connectors and the length of the cables. In the past, it took several days to log the network and the malfunctions with a laptop, but now they only needed to start up the application to see the state of the network. That is because there are “traffic lights” in ProfiTrace that give an immediate indication of the status of the network. By providing insight into the problems, they could be solved fairly simply.
“We use the reporting tool frequently. The traffic-light function which lets you see immediately whether the network is healthy provides fast confirmation of the situation. Using the scope, it’s possible to take a quick look at images of various nodes. That allows us to see quickly whether anything is not coming in correctly and look directly at where we need to search in the event of failures.”

The positive experiences with PROCENTEC led to the waste processing plant purchasing a ProfiHub as well, which was introduced into the existing network in the bio-energy plant. As they explain themselves: “That network was already under fairly heavy strain and in order not to further increase the load, we decided to remove an existing node. We positioned the ProfiHub at that point, which allowed us to continue further with four new segments.”

At the waste processing plant, they are convinced that the ProfiHub and various repeaters that have been placed in the network have led to real improvements and that there are fewer stoppages.
The great advantage of this solution is that the physical bus load is only one node and that new segments begin behind the hub. “This way, for instance, you can still extend a bus that has reached its maximum in terms of cable length.” 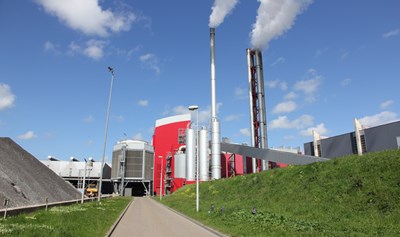 The PROFIBUS network is currently in excellent shape. “We have achieved noticeable results. For instance, we haven’t had any more phantom malfunctions and we now have fewer problems with failures. We can see – that shows ProfiTrace as well – that the signals on the network are better due to the implementation of an active terminal resistance or a repeater. As a result, we have fewer stoppages or strange problems. So production can just continue as normal without any loss of time or money.”